Above:  Runners by Inariyama Kofun (Tekken was excavated) at The Sakitama Ancient Burial Mound Park

In National Treasure Exhibition Room, you can see the valuable artifacts, not only national treasure, Gold-inlaid Iron Sword and other artifacts on Inariyama Kofun and Shogunyama Kofun

Iron sword crumbles with rust, however clearly we can read the characters in gold-inlaid now.

The character 「SHINGAI」shows that this sword was produced in 471, more than 1500 years ago. And this is the centennial and marvelous discovery in archeological and ancient history.

The simplified version of the inscription on the sword

“Inscribed in the seventh month of the Shingai year(A.D.471).  I ,Wowake and our ancestors served the royal family as guard for generations.

I served the Great King Wakatakeru and contributed to his rules over the whole land. I, hereby, engrave this grand sword as the commemoration of our families’ distinguished achievements.”

There are two important points on this sword.

1.The sword has perfect information of 5W+1H except one.

What:   Made Tekken (Iron sword)

Why:    To commemorate the brilliant performance

How:    Engrave the names

So, this sword and AD471 became the fixed point in Ancient Japanese History.

Wakatakeru the Great King (21st Emperor Yuryaku) was a unique man. He killed his two brothers, four his rivals to climb the throne of the Emperor and he had four his wives. He ruled most of Japan from Kyushu to Kanto district in the 2nd half of the 5th century. He also sent a letter to China.

About 150 years later, Li Shimin the second Emperor of Tang Dynasty, was born in China. He made cornerstone of the Tang Dynasty. He killed his two brothers to get a throne of the Emperor. However, he listened advices of his subordinates and he became one of the great Emperors in Chinese history.

You can see the straight sword, iron hoe, gold belt decorations and mirror in this showcase.

These artifacts together with Gold-inlaid Iron Sword that were unearthed in the sand coffin on Inariyama Kofun are all national treasure.

There are valuable materials that were unearthed from other Kofuns in showcases.

These Gold belt decorations are thin copper placed with gold. They include fretwork that depicts dragon and bells around the waist. They are gorgeous and rare decorations. Most of these accessories were either imported or made by artisans from China or the Korean Peninsula.

These are Deity-and-Beast Mirror and comma-shaped beads made of nephrite found on Inariyama Kofun. These two artifacts were unearthed around the head of the king. The silver earrings were also found at near place to mirror and beads.

There are iron ax, a pair of pincers, tweezers, plane and grindstone etc in this showcase. So, the king might have a group of smith artisan. 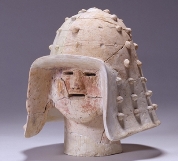 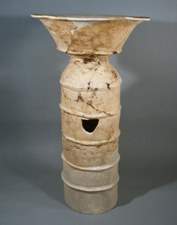 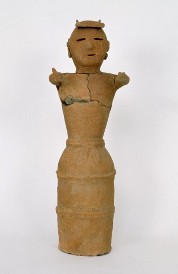 It is supposed, these Hajiki and Sueki in this showcase were placed at Tsukuridashi that were produced at the west side of Kofun and used for ritual objects.

These in this showcase are Haniwas unearthed on Inariyama Kofun. Haniwas were placed on the top of the Kofun and around the Kofun.

There are several types of Haniwas such as House-shaped, Cylinder-shaped, Warriors Head-shaped, Shrine-Maiden, Horse, Wild boar and other animals.

These were made for ritual use and buried with the dead as funeral objects.

In this showcase, they exhibit Haniwas unearthed at Kawarazyka Kofun in front of this Museum.

This Kofun was built from the early 6th century to middle of the century.

A lot of Haniwas were remained at middle bank of the west side of Kofun.

This showcase shows us the artifacts unearthed at Shogunyama Kofun. The Kofun was built in the 2nd half of the 6th century, about 100 years later than Inariyama Kofun.

Shogunyama Kofun Exhibit Hall shows the situation that was excavated in 1894. You can enter the hall of the Kofun with the ticket of this hall. So, please enjoy yourself.

Variety artifacts such as copper bowl, simple armor, Kanto-sword and decoration accessories for horse were unearthed. Artifacts are kept at Tokyo National Museum, General Research Museum of Tokyo University and this

Stones with holes used at stone chamber were called Boshuishi-stone that were carried up to 60 miles from Boshu(Chiba prefecture) faced the Pacific Ocean. This means that logistics on river by ships was more developed than that on land in those days.

One of the unique artifacts is the helmet for horse. Only three helmets were unearthed in Japan, however these were found more often at Kofun in Korean Peninsula.

You can send your Message through