Above:  The Bell Tower: This bell rolls on the New Year's Eve every year.

It is said that Oshi Suwa Shrine originated the period that Oshi Saburo, Oshi Goro and their clan built their residence in 1190. Another origin was that when the 14th lord of Oshi castle, Narita Akiyasu and his clan built Oshi Castle (around in 1478), this was a Mochida Village Shrine and Castle Shrine. So successor Lord of Oshi Castle had been respecting this shrine.

Furthermore Oshi Toshogu Shrine was built in here together to respect Tokugawa Ieyasu and Matsudaira Tadayoshi, the fist lord of Oshi-Han.

Matsudaira Tadayoshi is the fourth son of Tokugawa Ieyasu.

Tokugawa Ieyasu gave his the first daughter, Kamehime this painting.

Oshi-han was the nearest Shinpan to Edo(Tokyo) geographically and had close relation with Tokugawa shogunate. So, the Meiji new government ordered Oshi-han to destroy the Castle and other everything include trees at Castle site.

So, people had to cut down trees at Suwa forest. When they saw a tree run red liquid like blood, they stopped cutting trees at the forest. So, these trees remained here.

Also, as maidenhair tree contains water in it, it is hard to burn, these trees are often planted around temples and shrines to prevent fire.

This gate is to divide the region of Oshi Castle・Suwa-Shrine and area of Two-story Tower. It is one of the fifteen gates of Oshi Castle. This was a very important gate to defend the Honmaru, core region of this castle.

On Narita clan, there is an episode. Ujinaga’s wife was from the Yokose clan in Kozuke(Gunma prefecture) and two clan had been allied. However Yokose obeyed the Uesugi, then Narita and Yokose opposed and Ujinaga had to divorce his wife although he loved his wife. He and their daughter (two years old) stood to see off his wife near the castle. The place was called the Bridge of Divorce. About 50 yards away, the wife saw back them with tear at an another bridge. It was called the Bridge of Tears.

His attitude was ordinal performance that Japanese samurai showed to maintain clan at that time. Later the daughter (Kaihime) fought against Ishida Mitsunari.

When the Lord Matsudaira Tadataka moved from Kuwana-han in 1823, he brought this bell by ship. The distance between Kuwana and Oshi (Gyoda) is about 300 miles. This tower was rebuilt in Heisei Period and the original bell is kept in this museum. The new bell rolls on New Year’s Eve every year.

This gate reminds us the Numabashi-gate. The original gate might be built in 1689 and stood on a connecting island between the castle and the Samurai residence of Otemonn-gate area. Six guardsmen stood there and bows, guns, spears, lanterns etc were arranged. Torches were placed after the sunset and the gate was locked with chains at around five.(7-9 p.m.)  It is said that this was the finest gate in the fifteen gates at that time.

When you walk on the Taikobashi-bridge, please look into moat. Carp’ll come to you. And you may be surprised by how much noise these carp make when fighting for food that it thrown to them.

This is the three-story-building that Lord of han could not build the Castle Tower or he intentionally didn’t build it in Edo Period, Because of careful consideration to the Tokugawa Shogunate. So, this is an effective Castle Tower. This building was used as book storehouse that kept more than twelve thousand books in Okudaira・Matsudaira period.

After Abe Tadaaki entered the Oshi Castle in 1639, Abe clan ruled the Oshi-han, not only the castle but also the town for almost 184 years. This Three-story-building was built at late 1689. This was a magnificent castle that was suitable for his position, Rojyu(an executive) at Tokugawa Shogunate.

When Tadaaki was 9 years old, he started working for Tokugawa Iemitsu, 7 years old ( later the 3rd Shogun). The Abe had been an executive(Rojyu) of Tokugawa Shogunate consecutive for five family generations since Tadaaki got the position. His family had kept the position for the longest terms in Edo period.

You can see a few types of hole over there, such as circular, triangle and square holes on the white wall. They are loopholes and Samurais in the castle shot their guns from these loopholes.

This gate doesn’t have a roof.The original Oshi bell Tower was placed here in Edo Period.

(6) Retired house of Tadataka and Tadakuni

Matsudaira Tadataka is elder brother of Tadakuni. Matsudaira Tadakuni took up the post of the Lord of Oshi-han in 1841. He had duty of coast guard in Boso Peninsula in 1842 and was honored to receive the rank by the Emperor in 1844 and 1845. He also promoted to a member of Tamari-no-ma(became Rojyu) in 1845. He once again served for coast guard in Edo-gulf in 1846 and 1847. He retired in 1863, yet had a political influence. So, after Toba・Fusimi battle,  he unified the Oshi-han to obey the Meiji new government .

The Oshi Castle opened its gate the first in Kanto district, even though the castle surrendered the last in Civil War period (Attack by Mitsunari) in the district. It might relate that he once had received the honor of the high ranking from the Emperor.

Once Oshi castle was surrounded by marshy places. Now only this memorial park reminds us of marshy place.

People enjoy the fishing contest once a year and about two hundreds of citizens in three groups, male, female and child, show us their skill of fishing around this pond.

Water shooting ceremony by fire fighters is held in January every year.

It is fan for people to watch lives of nature and historical legacies at this park in the morning. This is the oldest City Planned Park in Saitama Prefecture and it follows the example of Chinese Lakeside Park. 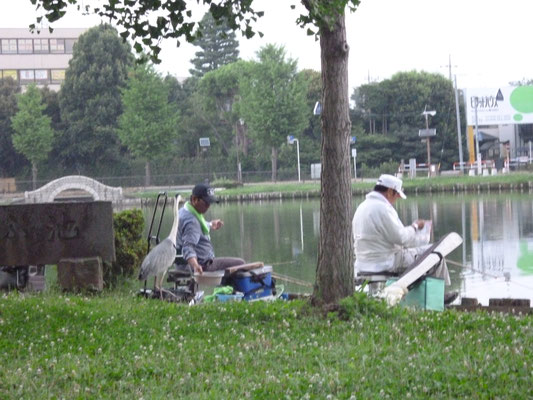 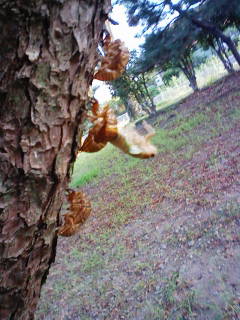 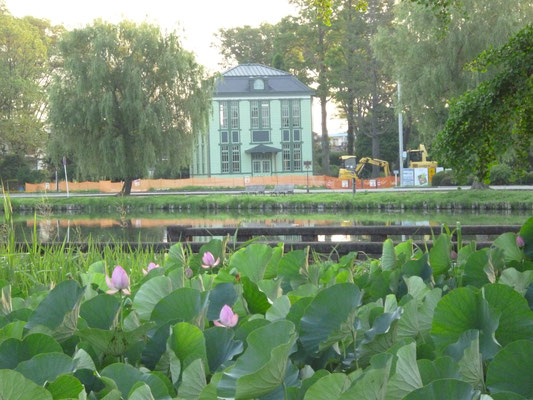 The Financial office stood here and they manage tax for people in village, town and also provision of rice for Samurais in Oshi-han.

There were fifteen gates around The Oshi Castle in late Edo Period.

And these gates were included in them and most of them stood on the bridges over rivers. However, when Ishida Mitsunari attacked the Oshi castle, there were only five gates.

The Lord Abe Masataka cerebrated the centennial year in 1738 since his forefather the Lord Abe Tadaaki had entered into the Oshi castle. They stretched special curtains on these two gates.

This gate stood to be away from Sannomaru where the Deputy Lord( executive) lived from the area of Kanjyosho. Three guardsmen stood there and spears, sticks and lanterns were arranged and the gate was closed around 6 p.m.

This is an entrance gate of Ninomaru where the Lord lived. The same preparation like Naritamon-gate was arranged.

This low gate was built as a front entrance of Samurai’s house in 1832. This might be painted in red in those days and might be used at school of Oshi-han.

These are stones that were used as stone walls for three-story building( one ridge) and two-story buildings( two ridges ) at Oshi castle in 1702.

Take a look at unique shape of these stones !

This is a Korai-mon gate. This type of gate was castle gate that began to build after Toyotomi Hideyoshi invaded Korea. (1592, 1598) This tall gate was for Samurai on a horse or a servant with a long spear, and they could go through this gate.

There are two fish at spires on the roof of the castle. They are gargoyles, imaginary animal which figure is fish, head is tiger with sharp needles on his back and tail always faces to sky. They guard the castle from evil spirits. They are called Shachihoko.

We don’t know how much they weigh, however, we know the fact that kawara, roof clay tiles, craftsmen made these fish.

The kawara on the roof are called Sanshu-kawara and they were made in old Sanshu district of Aichi Prefecture.

Tokugawa Bakufu(Shogunate) continued its reign for about 260 years and in the meantime, Japan could keep peace and prosperity as Edo period.(1603--1868)

The equivalent dynasty was Tang Dynasty that performed long reign of 290 years prosperity in China. Li Shimin(the second Emperor, Taizong) build the cornerstone of the dynasty. His questions and answers on his reign with subordinates were summarized into documents after his death.

Later, Minamoto Yoritomo and Tokugawa Ieyasu studied the documents as a textbook of rulers.

This would be held in middle November around the site of Oshi Castle.

People from Gyoda’s commerce and Industry companies and visitors can have good relation in this festival.

They march along the city street toward Oshi castle and sit in front of the Castle Gate. Many people take pictures of them there. Each lord wears a different helmet and crest. You can tell who’s who by their helmets and crests.

You can send your Message through